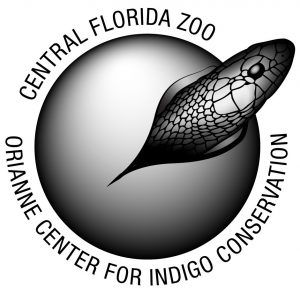 The Orianne Center for Indigo Conservation (OCIC) is operated by the Central Florida Zoo & Botanical Gardens and is the only captive breeding facility for the Eastern Indigo Snake with the sole purpose of releasing the offspring into regions where the population has been extirpated. The OCIC’s mission is to re-establish this threatened species into its former range. Snakes hatched at the OCIC are reintroduced in regions where historic populations have disappeared. To accomplish this, partnerships with nonprofit organizations and regulatory agencies combine both expertise and resources to reach program goals.

The Eastern Indigo Snake (Drymarchon couperi) is listed as a threatened species throughout its range in the Southeast Coastal Plain. This species is America’s longest snake and is now only found in southern Georgia and peninsular Florida. Increasing population pressures include habitat loss, habitat fragmentation, and the decline of Gopher Tortoise communities.

A critical factor for Eastern indigo snakes is the opportunity to thermoregulate. The OCIC’s outdoor habitats allow the snakes an opportunity to experience seasonal weather changes and temperature cycles which are key to long-term reproductive success.  Each outdoor habitat is designed with an underground bunker that simulates a Gopher Tortoise burrow. In the summer these “dens” provide cool retreats from the mid-day sun, and during cold winter months, the dens maintain a warmer temperature by being in the ground. In addition to matching the thermal conditions found inside a Gopher Tortoise burrow, the snakes also have the ability to bask in the sun and receive the benefits of ultraviolet radiation.

The reintroduction efforts for the Eastern Indigo Snake are only the beginning of building a healthy sustainable population. With the continuous help and support from our partners, foundations, and donors, the Eastern Indigo Snake is on its way to becoming a thriving species in the southern U.S. and will continue to play a vital role in our ecosystem.

Help us monitor the Eastern indigo’s survival in the wild with a contribution of $250.

Orianne Center for Indigo Conservation to host second I...

A dentist for a bear? How specialists helped our Florid...