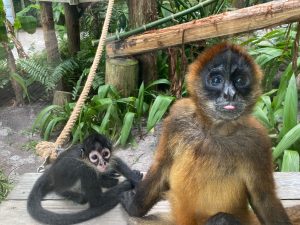 While baby spider monkeys might look so cute you just want to hold one, having a spider monkey as a pet is anything but innocent.

The cruel truth is that in order for wildlife traffickers to obtain infant spider monkeys to sell into the pet trade, they have to kill the entire troop. That’s exactly what officials believe happened to the three new spider monkeys who have been placed with the Central Florida Zoo & Botanical Gardens. Now, the three primates will serve as a beacon for hope for animal conservation in more ways than one.

“At the Central Florida Zoo & Botanical Gardens, conservation and education are at the very heart of our mission,” said CEO Richard E. Glover, Jr. “We are thrilled that despite their horrible start in life, we are able to provide these monkeys with a safe life with excellent care. They will also make a difference for their species and many others by helping educate the public about the importance of ending wildlife trafficking and the illegal pet trade.”

The three infant Mexican spider monkeys were confiscated at the U.S/Mexico border, where they were being smuggled into the country as part of the illegal pet trade. Because they appear to be different ages, officials believe they are from three different troops, meaning many monkeys were killed in the wild to obtain the infants.

They came to the Central Florida Zoo & Botanical Gardens through a partnership with the U.S. government and the Association of Zoos & Aquariums (AZA).

The small troop is made up of one male and two females, all between five and six months old. They have been successfully introduced to the Zoo’s 41-year-old black-handed spider monkey, Big Guy, who has been a dad 15 times and who has strong paternal instincts.

Because of the series of unfortunate events that robbed the babies of their ability to live out their lives in the tropical forest of Central America, the spider monkeys were named Sunny, Violet and Klaus, after the characters in the book series, “A Series of Unfortunate Events.”

But the fact that the spider monkeys will be able to live safely and serve as examples of the horrors of animal trafficking is not the only silver lining to their story. They will also be “founders” in the AZA’s Species Survival Plan. This means that they will bring new genetic lines to the AZA population of spider monkeys, supporting the goal of creating self-sustaining, genetically healthy populations in AZA-accredited institutions.

“These three spider monkeys have been acclimating well and hitting the milestones we expect,” said Chris Torge, the Zoo’s director of animal operations. “As they continue to grow and reach maturity, they will help so many people understand not only their species, but also the issue of wildlife trafficking and what they can do to stop it. We encourage everyone not to support the illegal pet trade.”

The spider monkeys are currently on display at the Zoo.