How One Young “Keeper” Inspired Us All

How One Young “Keeper” Inspired Us All 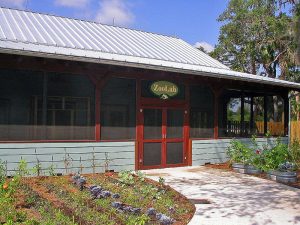 The Zoo proudly offers a variety of private experiences, from animal encounters to working with our animal care team. One of our programs is the Family Zookeeper Experience, a parent and child work alongside our Animal Ambassador Keepers. These Zookeepers take care of animals in ZooLab—a behind-the-scenes area of the Zoo where our Animal Ambassadors for education programs live.

The ZooLab animals may not reside in habitats out in the Zoo, but their role as Animal Ambassadors is an important part of our conservation based education. They are handled by specially trained Zookeepers, Zoo teachers, staff, and volunteers to be presented to the public during our weekend Wild Tales Show, education programs, Zoo events, and even on television and radio!

Last year, we had a young visitor named Zoey participate in the Family Zookeeper Experience with her mom. Our Animal Ambassador Keeper, Hilaire, led them through a hands-on morning—giving them a firsthand glimpse into the day to day life of a Zookeeper. They worked as a team to prepare meals, create enrichment, and clean habitats. Zoey was even able to observe examples of animal medical care and training sessions! They spent time exploring and meeting several Animal Ambassadors—including parrots, tortoises, snakes, frogs, rabbits, opossum, owl, and more.

At the end of the experience, Hilaire offered Zoey a unique opportunity. As a form of enrichment, several of the Zoo’s animals have learned to paint. These animal artists are given the opportunity to step or slither through animal-safe paint onto a canvas, creating one-of-a-kind pieces of art patterned by their footprints, scales, and movements. Tinman, a Florida kingsnake, was the artist of the day and slithered through paint—colors chosen by Zoey—making a custom souvenir to take home at the end of their Family Zookeeper Experience.

The Zoo strives to make an impact on all our guests, so it was exciting to hear Zoey’s family signed up for the Family Zookeeper Experience again—this year bringing her dad along! They worked with Hilaire again, learning about daily Zookeeper duties and meeting ZooLab animals, including some they hadn’t met before. When Zoey noticed she didn’t see Tinman, Hilaire explained an unavoidable part of being a Zookeeper—providing lifelong care. After Zoey’s visit last year, Tinman unexpectedly became ill. After thorough medical examination and care, our veterinarian determined her condition was no longer treatable and the decision was made to humanely euthanize her. We provide individualized medical care for every animal, and always prioritize their quality of life. 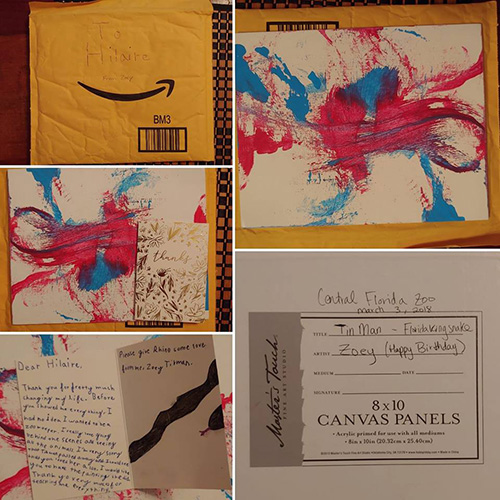 Though ZooLab is home to over sixty animals, Tinman was one of Hilaire’s favorite animals. Hilaire asked Zoey if she would take a photo of the painting they had made with Tinman during their first experience and e-mail it to the Zoo since she never kept a painting by Tinman for herself. A few weeks later, a package arrived at the Zoo for Hilaire. It was from Zoey; she had sent more than just a photo. She sent Tinman’s original painting along with a card thanking Hilaire for her Zoo experiences—she now wants to be a Zookeeper when she grows up! Hilaire was moved and shared her story online, and animal care professionals from all over the world commended Zoey’s selflessness.

We wanted to thank Zoey and her family for their generous act, so we invited the entire family back for another special experience. Hilaire arranged a special encounter with Rhino, our rhinoceros iguana, who was a favorite of their entire family during their first two experiences. She wanted Zoey to have a painting to replace the one Tinman had made, so Rhino walked through Zoey’s chosen colors and made a new masterpiece for them to take home. Rhino was rewarded with her favorite type of enrichment—tactile reinforcement, or light scratches (especially on top of her head)!

After the painting, the entire family was taken back to the Zoo’s wreathed hornbill habitat to participate in a special training session with Kaeli, one of our Bird Keepers. Animals learn behaviors that allow them to take part in their own care, including daily husbandry, medical procedures, and guest interactions. These sessions are a form of enrichment, while also improving animal welfare. Little did the family know, this was just a diversion.

Zoey and her family with Rhino and Hilaire. 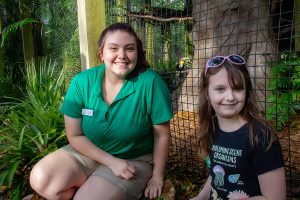 Zoey and Kaeli during a special wreathed hornbill training session.

At the end of the private training session, they headed back to ZooLab where they were met by several Animal Ambassador Keepers waiting to present Zoey with a special bag of gifts from animal professionals from across the globe. Hilaire explained to the family that Zoey’s kind gesture had touched her so much, that she shared the story to an online Zookeeper forum and it received hundreds of comments and shares. Several individuals from organizations throughout the world reached out, wanting to send kind words and gifts to Zoey for her selfless act. Items were sent from institutions in New Jersey, Key West, Cleveland, Baltimore, and even Australia! 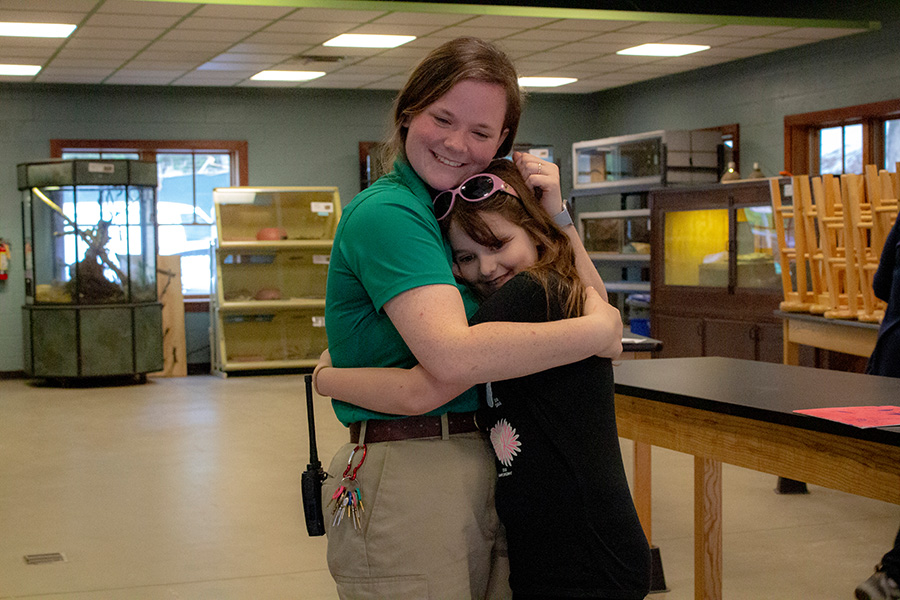 Through her love of animals and participation in the Zoo’s Family Zookeeper Experience, Zoey has not only learned more about zookeepers and wildlife but has made an impact on us through her passion for learning and generosity.

To learn more about our private experiences, please visit www.centralfloridazoo.org/private-experiences.

How to Help Zoos During COVID-19

Read More
Thanks for signing up!
MENU